The idea of "Harvest" seems a simple concept when viewed from any distance but when we're in the middle of harvest there is an overwhelming flurry of activity. Our very survival depends on doing everything right in this ten-week period. We race between vineyards, the winery and the tasting room, as well as needing to take care of the usual day to day operations. So, to stay focused on these activities and show you the range of activities on which we are working, we thought this newsletter should be the “photo edition.” So here are a few shots of our harvest thus far. The 2014 harvest summary will be in the October newsletter.

As of Tuesday September 23rd, all our grapes have been picked. It was our earliest picking season ever. Here are several of our favorite moments of Harvest 2014. 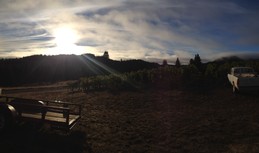 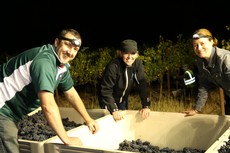 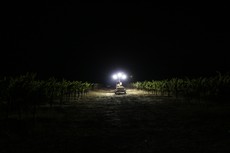 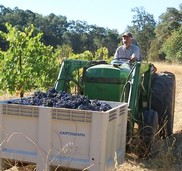 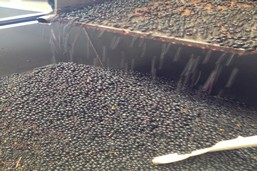 See the rest of the harvest photos on our photogallery. 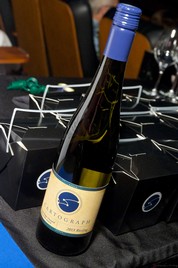 On Saturday Sept. 13th Cartograph Circle members met at the Raven Film Center for a special showing of the American Wine Story. It was great to hear people's reaction to this documentary which focuses on the inspiration behind making the leap to winemaking. And, we had a little extra fun as we served our new 2013 Greenwood Ridge Riesling at the theater and paired it with spicy-sweet popcorn.

After the movie Circle members were invited to the tasting room where we shared the new vineyard designate releases for Fall.

Because we included recipe pairings with the new wines released this fall, we thought we would take a different approach at the party. Given that the holiday party season will soon be here, we paired the new wines with a variety of cocktail party foods. We had a great time! 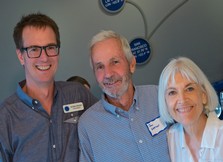 Another highlight from the release party was that the growers and owners of two of our vineyard were in attendance - John and Jan Upton (Upton Vineyard) and Steve Alden (Perli Vineyard). If you've been to the tasting room, you know how much we talk about the growers so it was great fun to have our Circle members meet them.

All in all, we had a great time catching up with Circle members and loved hearing their thoughts on the new wines. The new wines, with the exception of the Sangiovese which is only available to Circle members, are now on the tasting room menu.

And perhaps the best summary of the party is this photo:

To see all the photos from the Circle release party, please visit our photogallery.

In 2005 David Baker (no relation to Alan Baker) was listening to Alan Baker's podcasts "Ratcasts from the Cellar Rat" while honing his skills as a home winemaker. Having decided that making wine was not his passion but he was intrigued by the stories behind the winemakers, in 2009 David began reaching out to winemakers and recording their stories. David interviewed 70 winemakers and several of those stories, including Alan Baker's story, were woven together in a documentary called the American Wine Story. The documentary explores the passion that fueled each winemaker, the risks they faced in pursing their dream, and the courage needed to start over.

We’re off to the winery to do punchdowns, pressing, and taking care of the 2014 harvest.