The 2009 Cartograph Gewurtz is, in fact, a “dry” wine.  (geeky side note: A dry wine is a wine that has up to 4 grams per liter of residual sugar (EU regulation 753/2002) and our 2009 Gewurztraminer is well under 1g/liter - literally no perceived sweetness) It has a wonderful floral, perfumed aroma reminiscent of apricot, white peach, and honeysuckle blossom, with underlying mineral and slate aromas.

If you stop there, the wine has fooled you. It is not a perfumey, sweet, honey suckle wine.   On the palate the acidity steps forward in a very crisp manner and balances the flavors of honeydew melon, peach, and sweet citrus. It pairs beautifully with spicy foods because it cuts through the spice and heat bringing a refreshing zest to a meal. My favorite pairing is the Gewurztraminer with Vietnamese or Indian food.  A lovely surprise I discovered while in class at the SF Cheese School was that Munster pairs beautifully with Gewurz!

Several restaurants have put our Gewurztraminer on their wine lists and we’re hearing about all sorts of great pairings from foie gras to spicy meatballs. We also received a great review in the February 2011 Wine Enthusiast (91 points and editor’s choice!) and a really nice write up in Artful Living Magazine. It's always nice to get a little love back for something into which you've put so much of your heart.

So what is happening with the 2010 vintage?

The growing season for 2010 was a funky one as described by Alan previously in his post “2010- what a year in the vineyard.” We had a great time picking the 2010 Gewurtztraminer grapes as we had the pleasure of several friends participating in the process which makes those middle of the night picks a lot of fun. When picking Gewurtz, perhaps the very best thing is when you pop one of those beautiful grapes covered with dew in your mouth and it explodes with all the flavors you later see echoed in the wine. Delicious! 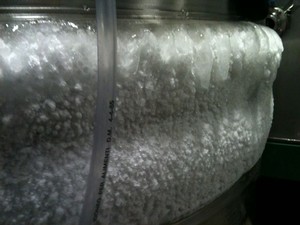 Ice forms on the side of the holding tank pre-bottling

The 2010 vintage had a nice long, slow ferment which preserves those wonderful aromas that Gewurz has and the wine has been quietly aging in steel drums. No oak is used in producing our dry Gewurztraminer. We've just transferred the wine to tank (see picture at left) to chill it down to about 26 degrees. This will prompt any tartrate crystals to precipitate out so that we leave them behind before bottling. This keeps the crystals from forming in your bottle as you chill the wine for drinking. We're excited to get this wine out to you because it is a dead ringer for the awesome 2009 version. We anticipate releasing the 2010 Gewurztraminer in early spring 2011. Stay tuned...  - Serena