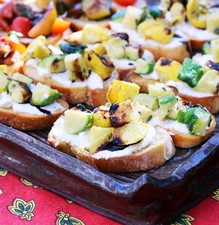 Serena's tip: I reduced the capers to 1/2 tsp because it was a little too salty with 1 tsp. I've used Parmesan as a substitute for Pecorino Romano and that works well too. I like using BelGioioso whole milk ricotta because it has great flavor and creaminess.

In a large frying pan on high, heat the olive oil. Add yellow squash, zucchini, onions, salt and pepper. Sauté for 4 minutes, allowing squash to lightly brown. Add garlic and sauté for 4-5 minutes, until squash is tender but not too mushy. Remove from heat, stir in basil and capers, and allow to cool slightly. Stir in vinegar and 1/4 cup of cheese.

To serve: spread about 1 tbsp Ricotta atop each crostini and top with a scant 1 tbsp of squash mixture. Garnish with grated Pecorino Romano and more basil.