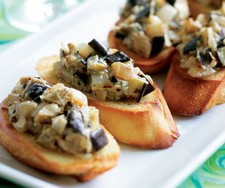 Pairing notes: The earthy notes of eggplant highlight the dark fruit elements of the Mendocino Ridge Pinot while complimenting the savory flavors.

Serena's tip: Make sure the eggplant is cooked through before removing it from the oven. You can put the lemon yogurt on the crostini and top it with the eggplant.

Preheat oven to 350 degress F. In a medium bowl toss eggplant, tomatoes, and garlic in olive oil, salt and pepper. Place vegetables on a parchment-lined baking sheet and bake for 35 - 40 minutes, tossing halfway through. Remove from oven, cool slightly and place mixture in the bowl of a food processor. Sprinkle with fenugreek and pulse mixture 5 times. In a small bowl, combine the lemon zest with yogurt and stir well.

To serve, spread 1 tbsp eggplant mixture on a crostini and garnish with 1/2 tbsp lemon yogurt. Sprinkle with chopped parsley.