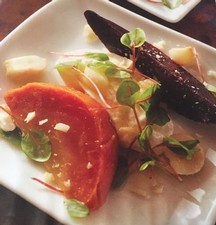 Pairing notes: The eathiness of the beets compliments the Bing cherry notes and the richness of the burrata elongates the finish of the pinot.

Serena's tip: We used much less dressing so as not to overpower the delicate flavors in the Pinot.

If using small beets, quarter them. If beets are large, cut them into 1 ½-in wedges. In large bowl, toss beets with 2 tbsp olive oil, salt, and pepper to coat well. Spread on a parchment-lined baking sheet in a single layer and bake, turning once, for about 40 minutes or until cooked through and slightly crispy. Remove from oven and let cool.

On a clean cutting board, slice each ball of burrata into quarters. To assemble dish, place a piece of burrata on each plate, tuck in 2-3 beets, and top with macadamia nuts and microgreens. Serve cold or at room temperature.

Our recipe pairings for the fall 2017 release are all coming from Chowgirls Killer Party Food, the best-selling cookbook written by good friends of ours from Minnesota. Chowgirls has been catering Cartograph’s Minnesota spring release parties since our debut, and chef Heidi Andermack has been friends with Alan since his days at Minnesota Public Radio.